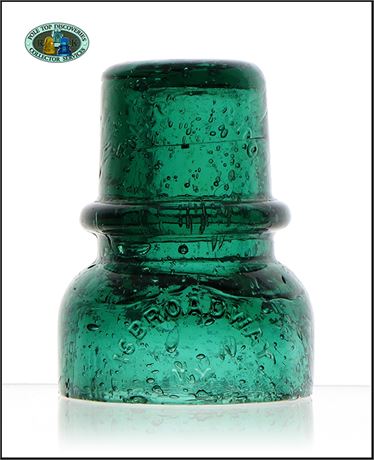 Beautiful and seldom encountered, rich green coloration.  Produced in the middle 1860's for Tilltoson & Company, a New York city based telegraph and railway supply company.  These beauties were used on the 1865 construction of the Collins Overland Telegraph line in British Columbia, Canada.

The late Bert Kirkland, an insulator collector who resided in British Columbia, spent many years searching the route of the Collins line in the area which he lived.  Most examples currently in collections of this particular tone/shade of green, with bubbles, were found by Bert.  He stated the majority surfaced between 70 Mile House and 83 Mile House, British Columbia, in the general vicinity where Stormy Road crossed the old Collins line route, thus he nicknamed them "stormy green."  An appropriate name considering all the bubbles in the glass.

Excellent embossing detail and incredible very, very near mint condition.  Unused appearance!  You will not find a better condition example than this impeccable jewel!