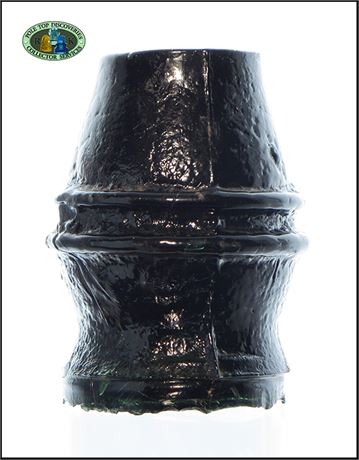 Known as the “Confederate egg.”  Discovered at a Richmond, Virginia construction site  in 1990.  The site reportedly was the location of a warehouse during the Civil War.  As a result of the burning of Richmond in April, 1865, most examples located in the area of a crumbled brick building were heavily damaged or destroyed.  Luckily, a sizable number survived and were recovered by eager diggers.

Historical significance makes these crude relics one of the most desirable insulators in the hobby today.  They survived the large fire which occurred in Richmond on April 3, 1865, as city residents and government officials fled, and Union forces entered.  The bloody war ended shortly afterwards, the Confederate States having lost their capitol city, as well as losing other recent important battles.  Crudely made with an extremely textured and pebbly surface!

The clean, shiny surface remains in excellent condition.  Has only one internal fracture, limited to only the skirt (undetected without bright light).  A beautiful example!