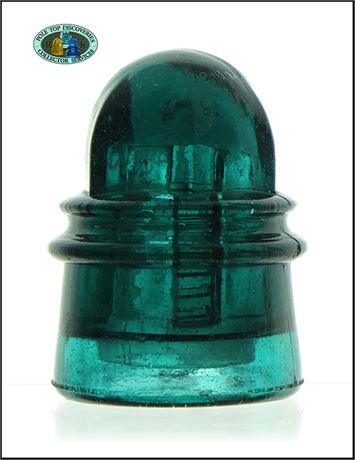 Samuel Oakman was involved with the glass manufacturing industry for decades in the 1800's.  He is most well known in the insulator collecting community for his involvement with insulators produced at Boston Bottle Works and for the American Insulator Company.  Boston City Directories from the 1870's show him as "agent" for Boston Bottle Works.

Oakman's two October, 1872 patents were for processes of forming threads in glass insulators.  Both patents involved a process in which the plunger, which formed the threads, could be rotated a quarter turn and then be withdrawn from the molded glass without any further rotation of the threaded mandrel.  The end result was an insulator formed with either a three or four segmented threads.

Dark teal, teal green and "emerald" green examples of Boston barrels are all quite elusive to collectors.  This unit has less green toning than many of the other known examples.  It was found along a railroad route in western Kentucky decades ago, and offered in Pole Top Discoveries' March, 1992 Catalogue of Scarce, Rare & Colorful Insulators.

A chip on the upper wire ridge and another on the lower wire ridge.  Flat base chip and associated one inch skirt fracture.  All are on the same side and shown in the second photo.  Other portions of the insulator remain in excellent condition, so displays well from most angles. Some embossing is quite strong and some weakened or obliterated.