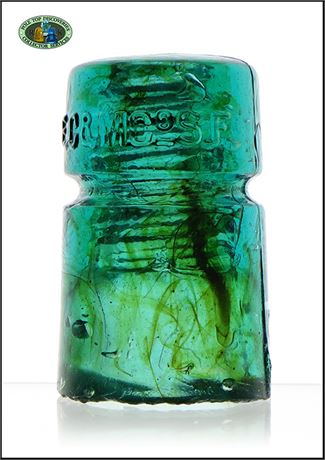 The attractive olive-amber impurities are most concentrated in the right, front skirt area, but also filter through other portions of the insulator.

Produced in the 1870's for the Electrical Construction & Maintenance Company of San Francisco, California.  The Ridge Telephone line constructed in the 1870's from French Corral, California to water reservoirs high in the mountains to the East, used EC&M's in the early stages of construction.  Many of the olive-amber swirled EC&M's now in collections were recovered on the route of that line, which was used to control water in the operation of hydraulic mining.

A shallow, "arrowhead" type surface chip (outlined with small white dots in second photo) on the reverse skirt.  Remainder of insulator is very near mint.  Other areas of the insulator have shadows, reflections, and surface creases which might appear as blemishes in the photos, but are actually not damage.  Backlighting shows this type swirling to much greater advantage than other display methods.