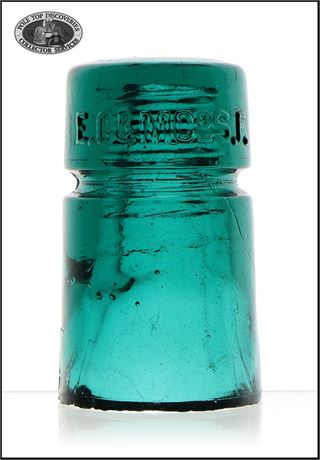 Embossed EC&M insulators were used at numerous locations in the West during the 1870's.  While most have been recovered in California and Nevada, they have also surfaced in Hawaii, Arizona, Oregon, Utah, Washington and northward into British Columbia, Canada.

The "B" mold was one of the most widely used, fair numbers of them being discovered on the route of the Central Pacific Railroad in California, Nevada and Utah.

No damage to report on the entire outer portion of the insulator.  Even the base lacks the usual flaking and chipping!  Only damage is a shallow base bruise as seen at center of the second photo.  A nice one!