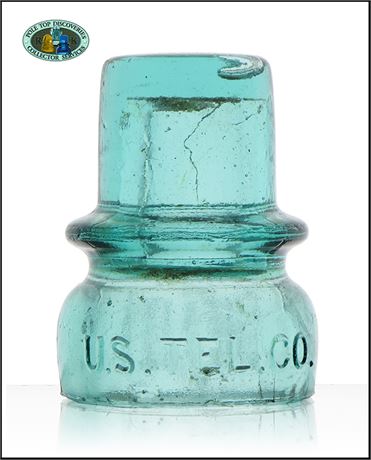 Made by a glass works in the 1860’s for the telegraph supply company operated by Charles and John Chester of New York City. The Chesters had the insulators marked with the name of their business, as well as the telegraph company they were supplying.

Threadless U.S. Tel Co. insulators were produced in dark aqua as well as this scarcer shade of light aqua.  The lighter aqua units are many times scarcer than the darker ones.

The United States Telegraph Company used these insulators on a portion of a transcontinental line they were constructing eastward from San Francisco, into the Nevada desert, and then linking with Salt Lake City.  Examples of the 735.3 have been found in northern California and Nevada.

The formation of the United States Telegraph Company took place on August 3, 1864, with the consolidation of a group of telegraph companies.  The merger created a strong competitor to the Western Union telegraph company, which by the middle 1860’s was fast becoming a giant in the industry.  The newly formed U.S. Tel. Co. became the third largest communication company in this country at the time of its formation.  The company opened dozens of new offices and constructed lines in all directions, even into Canada under what was called the “Provincial Telegraph Company.”  In 1865 the company had pushed its work with so much energy that it had in operation sixteen thousand miles of wire.

The United States Telegraph Company had also formed an organization for the purpose of building a line to run between San Francisco and the Missouri river.  The line would create direct competition to a transcontinental line built by Western Union in 1861.  In a short period of time the U.S. Tel line was constructed eastward out of Sacramento to Folsom and Placerville, California.

The line traversed over the Sierra Nevada Mountains and into the desert area of Nevada near Fallon, Cold Springs Station, near Austin and to an area northeast of Eureka, Nevada.  Eventually the line reached Salt Lake City, Utah.  Before the line could be completed to its eastern terminus, the company was in financial trouble.  In April, 1866, the company merged with the Western Union Telegraph Company.

In the mountainous and high country where heavy snowfall was a threat to the well being and maintenance of the line, wood block rams-horn insulators were used.  The glass threadless 735.3 was used in the Sacramento Valley of California and in the desert areas of Nevada.  In addition to the above mentioned areas, a few have also been dug in “Old Town Sacramento.”  A number of broken units were dug at Cold Springs Station in the late 1960’s or early 1970’s, presumably discarded there when the line was dismantled.  The 735.3 insulators were supplied by a telegraph supply house in New York City operated by Charles and John Chester.  They remain quite scarce, and are seldom available within the insulator collecting community.

From the collection of the late Lawrence Carpenter.