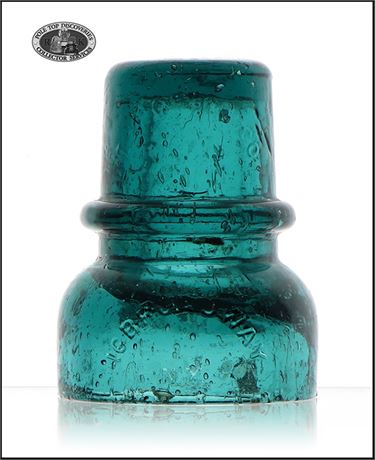 Arc embossed on both the dome and skirt. Bubbles scattered throughout the glass makes it all the more attractive.  Two bubbles near the reverse base create a heart shape (second image).

Used on the 1860's Collins Overland Telegraph Company line in British Columbia, Canada.  The line started at New Westminster, following the Fraser River Valley. Upon entering Fraser Canyon, the line paralleled the newly constructed Cariboo Wagon Road to Quesnel, 400 miles north of the U.S. border.  From there it headed northwest into the wilderness.

These attractive pilgrim hat threadless were produced for Tillotson & Company, a railway and telegraph supply house operating under this name during the 1860’s.  Sizable quantities of insulators and other telegraph supplies were shipped from New York City in late 1864, traversed all the way down to Cape Horn and back up the western coast of South America and North America to British Columbia, a distance of nearly 16,000 miles!  They arrived at New Westminster, British Columbia in June, 1865, and were immediately transported to the Fraser River, and destinations further north on the historic Cariboo Wagon Road.