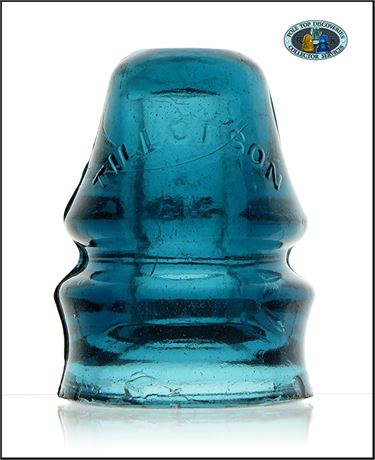 Luther Tillotson started a railway and telegraph supply company in New York City known as Tilltoson & Company in the early 1860's.  The name of the company was changed in the mid 1860's to L. G. Tillotson & Company, and remained such until Luther's death in 1885.

The "compromise" style, with concave skirt, was introduced in 1865, and soon became the standard design used by various telegraph companies, including the 731.  The 731 with Tillotson embossing was produced in numerous different colors, most of which are quite scarce or rare.  Due to the colorful variety available, they are popular and eagerly sought by threadless collectors.

An attractive example in a scarce color, and with very strong dome embossing.

Shallow skirt flake, up from the base is about pencil eraser diameter.  Flaking at middle of reverse wire ridge has a combined area of only an index fingernail, as shown in the second photo.  Please note that some of the dark areas on the ridge are reflection/shadowing and not damage.

*****Special Note.*****    For the past three years, Pole Top Discoveries has been offering examples of colored 731 Tillotsons from the largest and most diverse selection of this type insulator accumulated to date.  This is the final jewel from that grouping, so once this item and a handful of others from the Dick Bowman collection are offered, the availability of colored 731 Tillotsons will likely become "few and far between" once again.