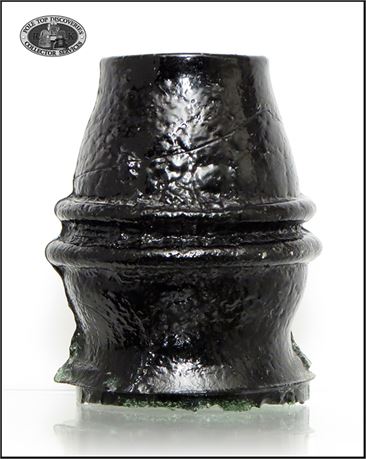 Discovered at a Richmond, Virginia construction site in 1990.  The site reportedly was the location of a warehouse during the Civil War.  As Union forces entered Richmond on April 3, 1865, Confederate troops and residents fled the city, part of which was engulfed in flames, including the building in which these insulators were stored.

A very crude example with wonderful character!  The shiny surface is coarse and pebbly, creating an "old" appearance.  The base plate was off-center when the insulator was pressed during manufacture, resulting in the overpoured extension being shifted to one side.  An abundance of thin glass protrudes outward on the side mold lines of the lower skirt area.

Amazingly, the thin base and lower skirt area are in excellent condition.  Even the glass "fins" at the mold line remain intact.  Outer area remains very near mint.  One internal stress fracture up from the base, into the pinhole is invisible without a very bright maglight.