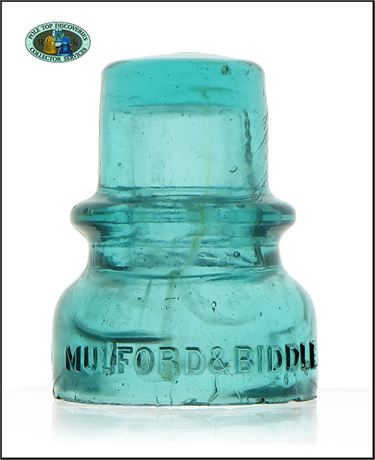 The vast majority of 735 Mulford & Biddles have been found in the western US and British Columbia, Canada.  Record of their discovery in the East has only been confirmed at two or three locations, and then only in very small numbers.  Apparently this size/design was well suited for easier and lighter transport to destinations far from where they originated.

Milky veils, most evident in the skirt, add some character.

For the sake of accuracy, a surface annealing line, of no consequence whatsoever to most collectors, follows the mold line on a portion of the dome.

Appears to have been tumble cleaned, likely to remove light surface haze.  Exceptional condition with only a couple match head flakes at the base corner and two smaller ones on the base.  Very nice!

From the collection of the late Lawrence Carpenter.