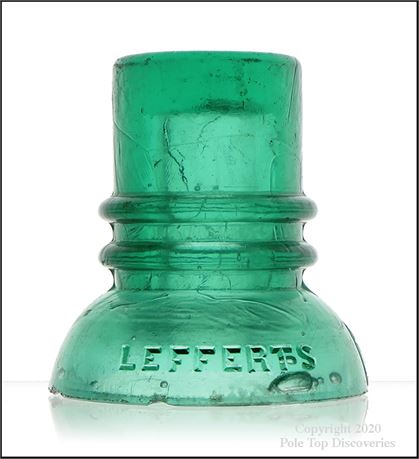 The city of New York was busy with trade during the 1840’s.  Included in the group of local merchants was an ambitious man by the name of Marshall Lefferts.  Among other things, he was involved with the sale of English zinc plated wire.  He supplied the Montreal Telegraph Company with “galvanized” wire in 1847.  The value of that wire was soon appreciated in America too, and Lefferts quickly developed a large business supplying it to various telegraph companies.  At first he had it imported from England, and later it was manufactured in the United States.

Through the sale of wire, Marshall Lefferts came to know a large number of prominent leaders in the telegraph industry.  Because of that association, he became directly involved with the organization and leadership of various telegraph companies in the 1840’s through the 1870’s. Lefferts continued his involvement for many years as both a supplier of telegraph wire, and as an officer for various telegraph companies.  He was active as an officer with the American Telegraph Company into the middle 1860’s.  His impact within the communications industry was greatly felt for many years.

The embossed Lefferts is an early item, dating as far back as the 1850’s and possibly into the 1840’s

Excellent overall condition, especially for this damage prone design!  Certainly one of the best condition green Lefferts in existence!  Has only three shallow base flakes, each only a half pinkie nail size.  Surface is a little hazy.  Bubble below "TS" is completely enclosed with no damage.  A great example!