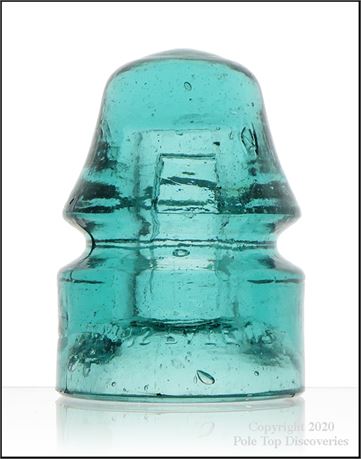 Double slotted threadless pinhole, designed to accept a wooden pin/wedge that locked the insulator onto the pin.  Nearly all known examples were found in the vicinity of a telegraph route between Philadelphia and New York City.  The line was originally constructed by the Magnetic Telegraph Company in the mid 1840's.  As time progressed with rebuilds and numerous added wires, various types of insulators were installed including these 728.7 Oakmans, 728.8 Boston Bottle Works and CD 158 Boston Bottle Works.

The embossing is positioned on the inner cavity, just below the pinhole.  This unit has such strong embossing that it can be read in reverse, looking through the glass from the outside!

Bright glass, shiny surface and easily grades very near mint, with only a couple match head base flakes.  A beauty!