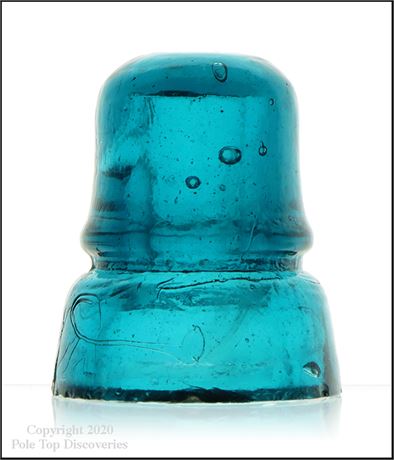 Produced for the Montreal Telegraph Company, which was formed in 1847.  The company used various types of threadless insulators during more than three decades the company existed.  The 742 design was likely developed during the 1860's and continued to be installed on communication lines into the 1870's.

Some threadless types were actually salvaged and repurposed in later years for secondary power lines on poles in yards and on lines running from building to building.  A few aqua 742's remained in use into the late 1900's and early 2000's.

Base has a small amount of shallow flaking, but nicer than most.  Shallow base bruise under part of the embossing, but all embossing is intact (see photo at center of base). Shiny, sparkling surface with no wear, dings or abrasions.

An attractive and seldom encountered colour.