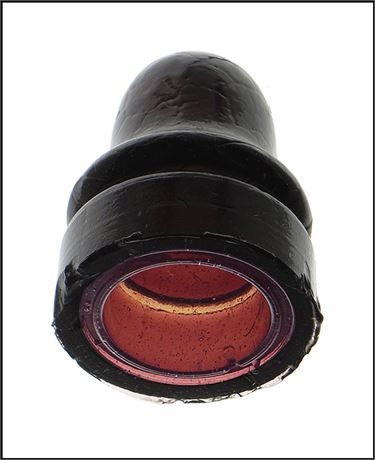 The 726 has been found in widespread areas in eastern Canada and the north-eastern US, ranging from Ontario to the Maritime Provinces, and Michigan to Maine.  Some have surfaced on railways which were completed in 1869 and 1870, indicating this style was likely produced into the late 1860’s and possibly the early or mid 1870’s.  They have been found in a rainbow of exotic colours, ranging from the more readily available aquas, various blues, a couple green shades, purple, cranberry and this strange puce colouration.  Black-glass purple and a couple variations of black-glass olive and olive amber have also been noted.

The Canada Glass Works in what is now Hudson, Quebec is known to have produced threadless insulators, including some 726’s.  The company manufactured various types of glassware including ornamental wares such as lamps, which required a wide range of coloured glass.  Pioneer insulator collector Jack Hayes, of Pakenham, Ontario excavated the old factory site decades ago, finding fragments of various threadless styles, including the 726.

Puce is a highly unusual colour, and rarely found in any type of glass article.  It has a “chameleon effect,” the colour tone changing dramatically in differing light sources.  Burgundy and gasoline-flesh tones are both present.

Shallow chip at the base corner,  longer than a pinkie nail, but also narrower.  Otherwise, shiny, very near mint.  A beauty!

BUY-NOW option removed once the reserve price was met.

Buy-Now and auction purchases will be invoiced by email prior to 12 noon, Tuesday, June 2.  Invoices will also be viewable to purchasers on the auction site at that time.