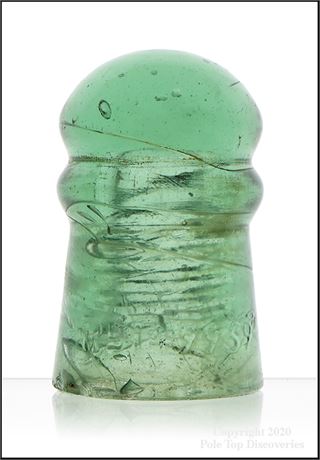 An intriguing insulator with a British registry marking, yet all examples we've confirmed have been found in the US.  Only a very limited number have surfaced.

The standard one inch pinhole traverses only as far up as the wire groove, creating an entirely solid glass dome!  Crudely formed threads add desirable character!

As with all other examples encountered, the base was ground at the time of production at the glass factory.  This practice likely took place due to an unfavorable molding method which resulted in an uneven or rough base.

No damage from usage.  There are a couple shallow, small flakes along the base edge, obviously present prior to the factory grinding.  The dark shapes near the base, left of center, are all interior bubbles, not damage.

An item that rarely surfaces for sale!  How many have been available in the past 25 years?