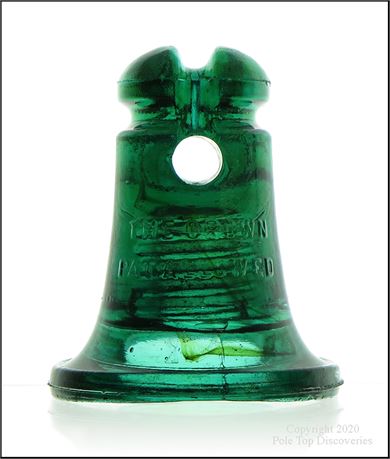 A spectacular insulator!  One of the more unusually designed rarities in the insulator hobby.  Daniel Rothenberger of Lancaster, Pennsylvania, assignor of two-thirds to Charles Ingles and Edward Reilly received a patent on September 3, 1895 for the unusual crown configuration.  A small grouping of them were discovered over four decades ago in a barn, located in the Adirondack region of upstate New York.  Aside from that discovery, at least two, and possibly three, were found in New Jersey.  This one is reported as having been discovered during the 1920's in Ohio, and has a most interesting history, as described below.

The "Crown" is among the grouping of very unusual designs that are placed high on the want list of CD specialists and general collectors who desire rare items.  A hole through the center of the insulator is quite unusual, but another unique and attractive feature is the ribbed conductor groove on top.    The groove is corrugated, having an appearance similar to the threads on a bolt.

This gem was in the possession of a Toledo, Ohio gentleman by the name "Arthur" for decades, and now finds it’s way into Pole Top Discoveries’ “Early August” auction.   The interesting story of the insulator is told by Arthur’s daughters Deb and Pam:

“Our dad’s father, “A.E.,” noticed the Crown insulator while walking along interurban tracks in Toledo Ohio.  That would have been in the mid 1920’s.  It was sparkling in the sun and in good condition.  A.E. put it on a shelf in the garage at his residence.  It stayed there unnoticed until his young son, Arthur, would ask to hold it.  And that is where our father found it in 1975 after Grandfather died.”

Grandfather lived an active and interesting life.  A first generation American born 1883 in Detroit, his family can be traced back 12 generations to Wurtemburg Germany in the mid 1500’s.  A.E. apprenticed out to the furrier trade in New York City at age 12.  He enjoyed working for B. Altman and an independent furrier in NYC for many years.  In 1910-11 A.E.’s boss sent him to Paris as chaperone for his 12-year old son who was training with a French furrier.  They had a good old time crossing on the Prinz Friedrich Wilhelm out of Bremen.  Knowing Grandfather, he sampled all the pleasures of Paris and cycled many kilometers in the surrounding countryside.

Returning from France in 1911, A.E. moved closer to his Midwestern roots, practicing his trade in Detroit, Chicago, Kansas City and even Denver.  Eventually settling in Toledo, Ohio and marrying his wife Elizabeth in 1924.  Our father, Arthur, was born in 1926 and raised as an only child.  Grandfather believed in seeing the sights and Dad enjoyed traveling to every World’s Fair within train-range. A.E. worked as a furrier in the winter and painted houses summers.  He stored his customers’ coats in a large cedar lined safe during the summer.  Dad had the safe dismantled and moved/reassembled to our home when he closed his father’s estate.  And 45 years later that is where we found the Crown insulator this summer, preserved and waiting in a 6-foot tall cedar lined safe.”

An amazing story indeed!  Arthur admired the beauty and uniqueness of the glass insulator as a child in his fathers garage during the 1930’s!  Imagine, it has been “in the family” since circa 1920’s!

The incredible, sparkling, very near mint+ condition makes this a most welcome addition to even the most discriminating collector.