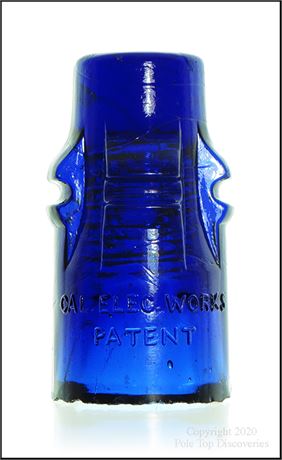 Most examples of this uniquely designed insulator were found decades ago along the route of the Ridge Telephone Company line in northern California, which was constructed shortly after the formation of California Electrical Works in 1877.  The line was built for controlling water used in hydraulic mining.  One of the first long distance telephone lines in the world, it extended from French Corral, North San Juan, and Graniteville to reservoirs high in the mountains to the East.

This basic design was patented by Paul Seiler in 1877.  Examples of the Seiler embossed insulators have six projections, whereas the Cal. Elec. Works examples have four.

This design is quite prone to damage, resulting in the majority of examples having moderate to heavy damage.  This is an amazing exception, remaining in excellent overall condition!  Much, much nicer than must!  Five of the eight flute sections remain flawless or very nearly so.  One has a pinhead flake.  One has a half match-head, super thin flake.  The final section has a match-head flake and another surface flake the diameter of a pencil eraser (see third photo showing the reverse, right flute, below the wire groove).  The base is quite nice, with only minor, shallow arrowhead flakes from excess glass removal around the outer edge.

Fourth photo does not include backlighting.

One of the very best cobalt Cals in existence.  A golden opportunity for anyone who has been waiting for a choice example to surface!