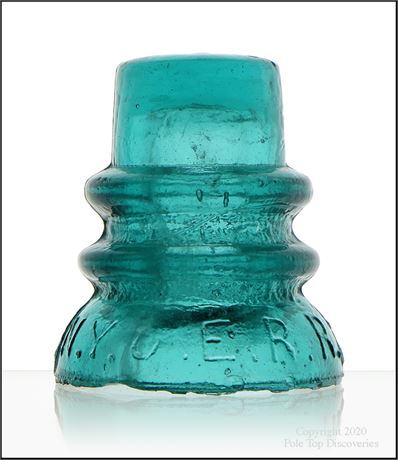 A rarely encountered pilgrim hat style threadless insulator.  Variant with embossing all on one mold half.

Some embossed NY&ERR hats were also placed in service along branch lines during that time period including those to Rochester and Buffalo, and later the Atlantic & Great Western Railway from Salamanca, New York, through northwestern Pennsylvania and then diagonally to Dayton, Ohio.  The Erie is known for its prolific use of large “hat” style threadless.

An exceptional example in wonderful condition!  A very thin flake on the base, the size of an index fingernail and another smaller than a pinkie nail.  One of the very best examples currently in the hobby!