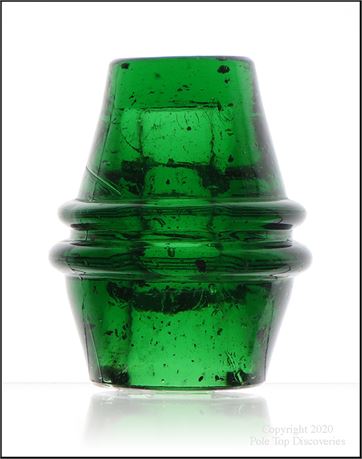 A very attractive, bright green coloration is present in the high quality, sparkling glass!   Generally believed to have been produced by the Boston & Sandwich Glass Company in Sandwich, Massachusetts.  Typically these egg style threadless insulators, dating circa 1850’s to mid 1860’s were produced with high quality glass exhibiting excellent clarity and richness, consistent with products made at the Sandwich works.  Other New England glasshouses were producing similar high quality glass, including Deming Jarvis’s Cape Cod Glass Works, and are also possible sources of these colorful gems, but all or most were likely made at the Boston & Sandwich factory.

The Boston & Sandwich Glass Company was formed in 1826, and the business soon prospered.  Deming Jarvis was the principal founder and manager of the large works. High quality, pressed ornamental and tableware were the primary products.  Articles such as dishes, vases, candlestick holders, lamps and other decorative wares were produced with very high quality and often colorful glass.

The company prospered for decades and a sizable village was built around the glass factory, housing hundreds of glass factory workers.  However, in 1858, a dispute between Deming Jarvis and the company Board of Directors, was resolved with Jarvis leaving the company.  Soon thereafter, Jarvis operated a separate glass works a short distance away, known as the Cape Cod Glass Works. Strong evidence suggests the Boston & Sandwich Glass Company produced insulators.  Lightning rod insulators were manufactured as early as the 1850’s.  Fragments of the 701.1 egg style threadless are reported to have been found at the factory site, as well as at least one deformed example.