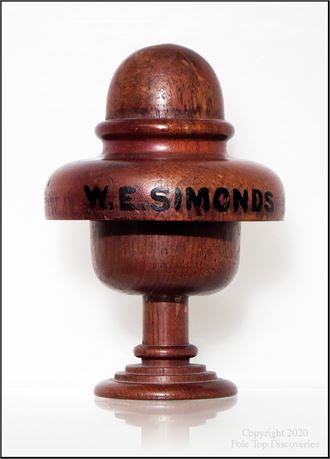 For decades  in the 1800's, patent models were required by the patent office for each invention application.  Some of these models have survived, and are actively sought by patent model specialty collectors.   Insulator patent models remain quite rare, this being one of the more desirable, as it involves an 1867 threadless type insulator!

W. Edgar Simonds, of Hartford, Connecticut received a patent on November 26, 1867 for an insulator to be made of glass, flint or other substance.  The insulator was to be formed in a way so as to create a dry space between the lower, central portion of the interior and a separate cup which fit inside the bottom part of the insulator.

The wood model appears to be made of mahogany, with black lettering "W.E. SIMONDS" painted onto the skirt area in sizable, block style lettering.

The main, upper portion of the insulator, which resembles a squatty glass 740, is entirely complete, as is the base pedestal.   At some point in time the thin interior "cup" received some damage and a small portion glued back in place.  A piece comprising about 35% of the cup only, is missing on the reverse.

Perhaps a once-in-a-lifetime opportunity to purchase a patent model for a highly recognized threadless insulator design!