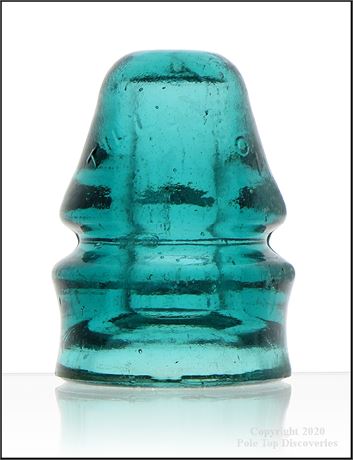 Nice embossing, which is consistently readable from a long distance.

In 1862 he began dealing in telegraph and railway supplies in New York City.  First his supply house was known as “Tillotson & Company.”  In 1864 the name was changed to “L. G. Tillotson & Company.”  In 1864 a right of way was given to the Western Union Telegraph Company by the Erie Railway to construct a line of telegraph wires on the unoccupied side of the track.  Mr. Tillotson, who also constructed lines as part of his New York supply business, built the line the following year.

In 1866 Tillotson resigned as superintendent of the Erie telegraph and devoted all attention to his growing New York business.  Among the hundreds of items offered by Tillotson were an assortment of threadless glass insulators.  The earliest units were probably unmarked examples.  There were also a number of different styles marked “Tillotson & Co. 16 Broadway N.Y.”  Later, possibly in 1865, some were marked “L. G. Tillotson & Co. 26 Dey St. N.Y.   At about the same time or shortly thereafter, some were marked “L.G.T. & Co.” or simply “Tillotson.”

The 731 was likely among the last threadless types produced with embossed "Tillotson" name.

No chips.  There is some wear  on the right side, affecting a little of the dome, the upper and lower wire ridges, and the very bottom of the skirt.  The wire ridges in this area are dull.  Remainder of insulator is excellent.