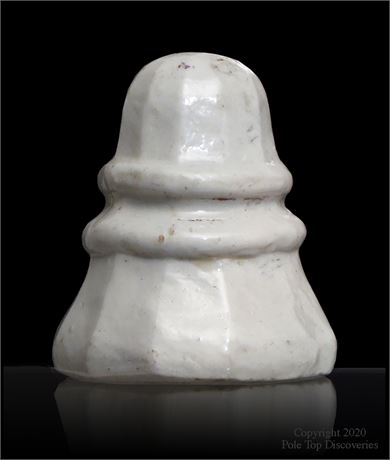 This style Elliott threadless is much rarer than the U-980 "horned" type and the U-981 "hat" style.  We have confirmed only three or four to exist.  Elton Gish reports one surfaced at a flea market in New Jersey about 25 years ago, but it is unknown where it originated.  The location of where the other examples have surfaced is also unknown.

Produced in the 1850's, most likely by the United States Pottery Company in Bennington, Vermont.  A large display by the company was presented in 1853 at the Crystal Palace during the "Exhibition of the Industry of All Nations" in New York City.  The illustration shown in the third image of this auction description depicts three "Elliott" type insulators in two different styles within the 1853 Crystal Palace display.

Collectors are quite fortunate that several early articles and references were written on the Elliott insulators during and shortly after the time of their manufacture.  One of the more detailed accountings of their history was written in 1860 by George B. Prescott in his book History, Theory, and Practice of the Electric Telegraph.       Following are several excerpts from his detailed study of the “Elliot Flint” insulators: The white flint insulator (Fig. 80) invented by Mr. E. B. Elliot, we consider the best in use.  The superiority of this insulator consists in its strength, insulating properties, and economy.  The claim for invention is twofold: the anti-porous nature of the material, being the result of a continued series of careful experiments, and the improvements in form, tending to give increased strength, and also affording additional protection against the ill effects of atmospheric changes."

"Its composition is flint, feldspar and quartz, principally flint.  The strength of the insulators in use has been thoroughly tested by pistol-balls, and also by being forcibly brought in contact with     iron-protected insulators in common use; in the former case merely flattening the bullets upon the convex surface, without fracturing the insulator, and in the latter case breaking not only the glass within the iron, but fracturing the iron protection itself.  Its insulating properties equal those of the purest glass, and are superior to those of glass in common use.   The corrugations beneath serve as additional protection against such an accumulation of moisture as would permit the premature escape of the electric current, since the moisture is little likely to collect, at one and the same time on the ridges and in the depressions.  Hence, there is left dry upon the surface at least one dry and insulating ring, which the electricity can not pass.”

"As regards economy, this insulator can be afforded at a lower price than any protected insulator heretofore used, the prices ranging from ten to fifteen cents each, being determined by the quantity used and pattern adopted.   In using the white-flint insulator, we strongly recommend the use of wooden brackets for supports...”

“This insulator has been used to some extent during the past five years, and experience has demonstrated the correctness of the statements we have made in regard to it; and although it is not a perfect insulator, it approaches nearer the requirements of such than any other which has been tried.