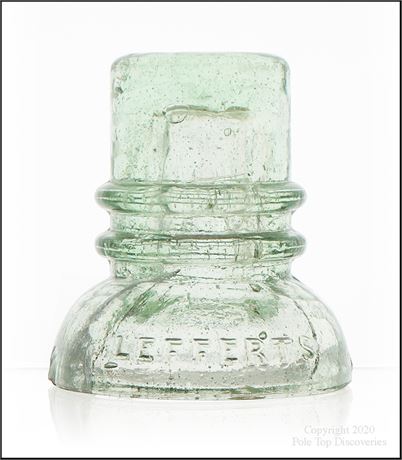 A highly unusual color for any threadless insulator, and especially eye catching in this large pilgrim hat style with "Lefferts" embossing.  To date, the only reported example in this amazing color with excellent clarity and brightness!

Pilgrim hat threadless with Lefferts embossing are typically found in aquamarine colored glass, and occasionally a medium green shade.  This is quite a contrasting, stand out example!

Most 737 Lefferts have been found in the Eastern and Southern portions of the US, ranging from New Jersey, Pennsylvania and into the deep South.  One of the more significant finds of 737 Lefferts took place in 2004 at a construction site in Augusta, Georgia, where several Lefferts surfaced, including examples in aqua and medium green coloration.

The city of New York was busy with trade during the 1840’s.  Included in the group of local merchants was an ambitious man by the name of Marshall Lefferts.  Among other things, he was involved with the sale of English zinc plated wire.  He supplied the Montreal Telegraph Company with “galvanized” wire in 1847.  The value of that wire was soon appreciated in America too, and he quickly developed a large business supplying it to various telegraph companies.  At first he had it imported from England, and later it was manufactured in the United States.

Through the sale of wire, Lefferts came to know a large number of prominent leaders in the telegraph industry.  Because of that association, he became directly involved with the organization and leadership of various telegraph companies in the 1840’s through the 1870’s.

Has a flat base chip as seen in second photo.  Shallow fingernail chip on lower skirt, next to a tight fracture up from the base.  The fracture  (see red arrows in second photo) has the appearance of a surface annealing line when it starts at the base of the pinhole, staying very shallow.  It remains close to the surface until getting within 3/4" of the base, and then goes through the thickness of the glass.

A highly unusual and desirable color!