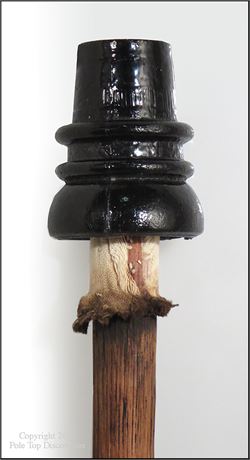 A wonderful pilgrim hat threadless discovered in the 1990’s “attic find” in northwestern Pennsylvania.  A wooden box was discovered in the attic of a mid 1800’s building, containing a number of 737.6 threadless insulators.  Some retained small amounts of rust stain in the wire groove, indicating they were used.  Like this example, several were still mounted on threadless wooden pins.  One can speculate that when an early telegraph line was dismantled in the area, the insulators were gathered and stored in the attic of the building.  Until this amazing discovery took place, the 737.6 was quite rare, with only two or three examples known.

Several 737.6 insulator fragments were dug by bottle collectors in the 1980’s and 1990’s at the site of the “Mountain Glass Works” near Saratoga, New York, confirming a manufacturer.   The glass company operated in the 1850’s and 1860’s, producing a large volume of bottles.  Among the bottles produced at the site were exceptionally large quantities of mineral water bottles, made for the numerous mineral springs in the Saratoga area.

Still retains the original threadless pin, measuring over nine inches in length.    The first photo shows the pin partially pulled out, revealing the white plaster cement and white cloth wrapping still present on the portion of the pin that goes inside the insulator!  The second photo shows the bottom of the pin squashed upward, indicating it was either used in a ridge pin application and reached the bottom of the hole drilled in the top of the pole, or perhaps it was mounted on a crossarm and a lineman hammered the portion of the pin protruding below the crossarm.

A wonderful example that "tells the story" first hand how threadless were used!