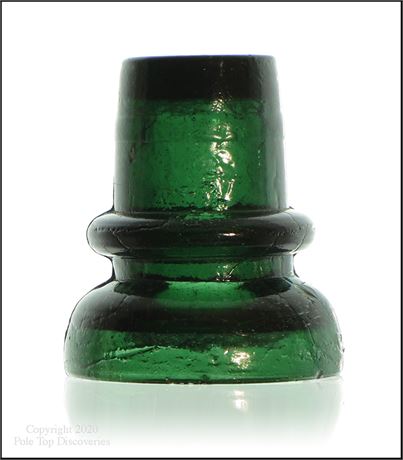 The embossing represents an early telegraph company in the state of Jalisco, Mexico.  Although we have not found specific information as to the exact year this particular company formed, we have seen several 1870's telegraph message blanks (telegrams) printed with the company name.

Embossed in the recessed area between the base and pinhole.  In addition, there is blotted embossing on the skirt from an earlier lettering, indicating the known skirt embossed examples of this type insulator predate this "base embossed" type.

An 1870 report on the various statistics of Mexico states: "The aggregate length of telegraph lines amounted to 2,804 miles.  A telegraphic line is now in the course of construction from Monterey to Mier on the Rio Grande; from thence it will be extended, via Camargo to Reynosa, down the Matamoras.  The intended connection with the Texas line, on the Rio Grande, would place Mexico in direct communication with the United States telegraph system."

Information from the above mentioned report indicates nearly 3,000 miles of telegraph in use within Mexico during the threadless era, so these are likely just one of several threadless types used in Mexico.

Glass color is rich and dark, yet allows plenty of light to pass freely throughout the insulator.

An exceptional example, having only one thin flake on the skirt, the size of two match heads. Quite nice for a pilgrim hat, and certainly in far superior condition than some examples.

An item that rarely surfaces for sale!