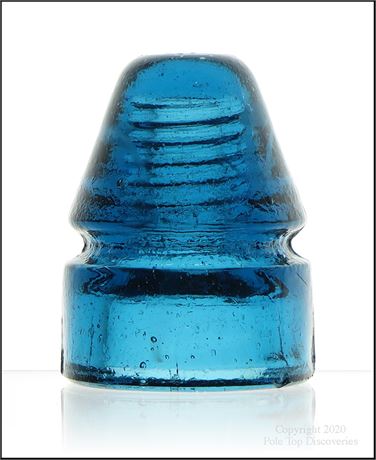 Embossed only with a medium size numeral "2" on top of the flat dome.

Several different shades/tones of blue unembossed Paisleys are known.  All are rare, with not more than a couple of each variant known to exist in collections.

These attractive and highly sought insulators were probably produced by a glasshouse in Beaver Falls, Pennsylvania.  In all likelihood, the glasshouse which made them was manufacturing colorful soda bottles, and used glass from the same glass batch to produce insulators.

This is a very desirable insulator for anyone who specializes in items that are part of the "Beaver Falls" insulator family, or rare, colorful glass in general.  Over the past several decades, nearly all of the exotic colored CD 132.2 have quietly changed hands privately, resulting in few collectors having opportunity to purchase them.  Here's a golden opportunity for everyone to have an equal shot at one of the choice examples!