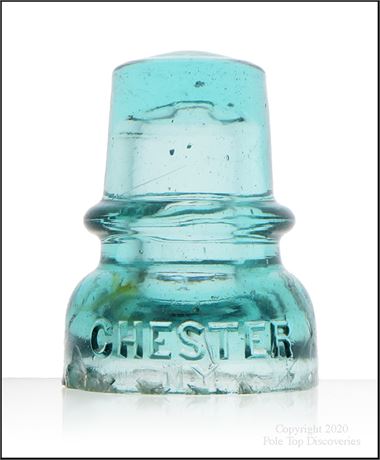 A small number of threadless 735 Chesters have been found along the Union Pacific Railroad right of way in Nebraska and Wyoming.  Aside from those few examples, the majority have been discovered in British Columbia, Canada, where they were used on the 1866 segment of the Collins Overland Telegraph Company line.

Portions of the “Collins line” were built in 1865 and 1866 as part of a grand project devised to link America with Europe.  Telegraph communication had been completed across America in 1861.  In 1864, a telegraph line reached northward from California to the State of Washington.  Materials from New York had arrived in British Columbia in June, 1865, and wire was strung in the general course of the Fraser River and Cariboo Wagon Road, to a point slightly beyond the town of Quesnel, by the close of the season in September.  The 1865 construction consisted of 735 Tillotsons.

An interesting feature, the dome bulges upward at the top.

Sharp, bold embossing!  Flakes and shallow, small chips along the base edge as seen in the photos.