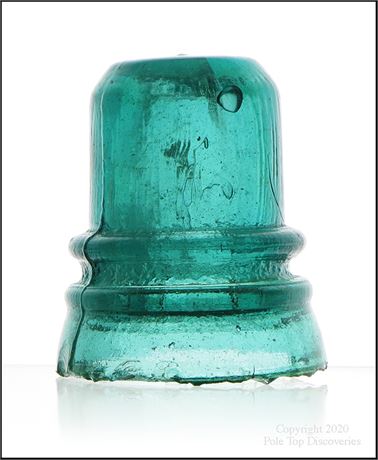 A very eye appealing style with short skirt and tall dome, further enhanced with a noticeable rippled "washboard" pattern all around the dome sides, to the upper wire ridge.

Some examples of this threadless "hat'" are found totally smooth and some with this attractive washboard type surface.  They have been discovered along the route of the original New York Central Railroad in New York State, which was founded in 1853 with the merger of several shorter railroads.

When it comes to actual damage from use, this gem would rank "very near mint," as it lacks any chips!  A pot-stone in the dome caused uneven temperature cooling, resulting in an internal fracture.  It traverses down from the stone, below the bottom wire ridge (not all the way the base), and in the opposite direction continues over the top of the dome, extending part way down the dome on the other side, as seen in the photos.