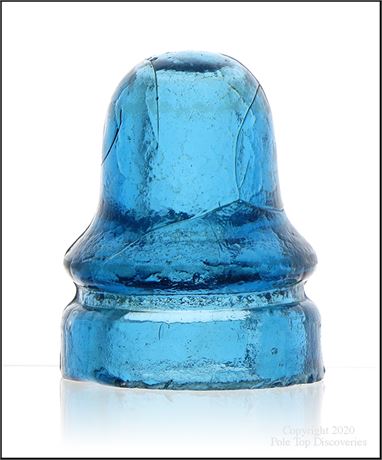 One of only four examples we've confirmed to exist in collections having this attractive blue colouration.  One was discovered in New Brunswick and another surfaced in Michigan many years ago.  This beauty was found along a railway in southwestern Quebec by the consignor during the early 1970's.

Cornflower blue 726 examples have been found with both a grooved base and the tapered "M.T. Co style" tapered base, this unit having a grooved base.

Skirt height varies on the 726, depending on the amount of glass placed in the mold during manufacture.  This gem has a rather short skirt, which contrasts exceptionally well with the extra tall, cone shaped dome.  An aesthetically pleasing beauty!

The base is dull, appearing to have been ground on a stone at the time of production to remove excess glass formed at the base edge mold line.

Skirt chip as seen in the second photo has an associated flat, fingernail chip on the base.