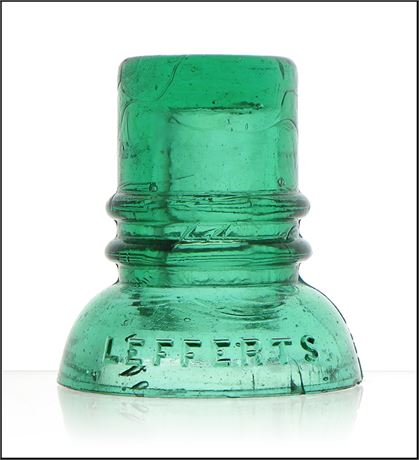 The embossed Lefferts is an early item, dating as far back as the 1850’s and possibly into the 1840’s.

Marshall Lefferts was a New York City businessman, who among other things, was involved with the sale of English zinc plated wire.  He supplied the Montreal Telegraph Company with “galvanized” wire in 1847.  The value of that wire was soon appreciated in America too, and he quickly developed a large business supplying it to various telegraph companies.  At first he had wire imported from England, and later it was manufactured in the United States.

Through the sale of wire, Lefferts came to know a large number of prominent leaders in the telegraph industry.  Because of that association, he became directly involved with the organization and leadership of various telegraph companies.

The green coloration in Lefferts "pilgrim hat" style threadless varies somewhat, this example being a little darker than some and having slight yellowish tones in the green.

The front remains very near mint and displays wonderfully.  Reverse base has a relatively flat base chip, and some shallow flakes along the edge, as seen in the second photo.