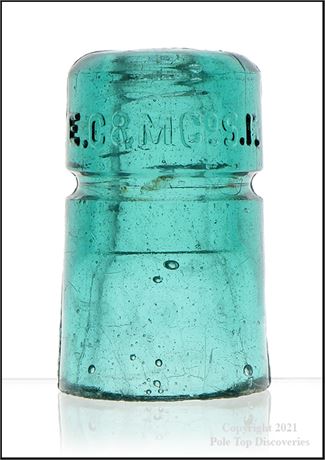 The "C" mold variant has a bevelled dome and rounded button on the skirt.

This example has threads which are less pronounced than usual. When viewed from the outside, as it sets on a shelf, an optical illusion is created. The pinhole appears mostly threadless!

EC&M’s saw widespread usage throughout the West in the 1870’s, first on telegraph lines, and then on telephone lines as that means of communication became more popular. They have been found as far north as British Columbia, Canada, and southward into Mexico. A few have even surfaced in Hawaii. Most were used in California and Nevada, to a great degree on railroads and lines constructed for mining purposes.

BUY-NOW lots are subject to the normal 12% buyer premium, added to the Buy-Now price.

All lots in this event numbered #884 and up are obtainable using two different purchase methods.  A bidder has the option of bidding on these lots at the current next raise as an auction item.  Or, you may make an instant purchase by clicking the "BUY-NOW" area, positioned just below the green "SUBMIT BID" button.

A reserve has been set on Buy-Now lots.  Once the reserve amount has been met, the Buy-Now option will no longer be available.

Buy-Now and auction purchases will be invoiced by email prior to 12 noon, Tuesday, January 12.  Invoices will also be viewable to purchasers on the auction site at that time.