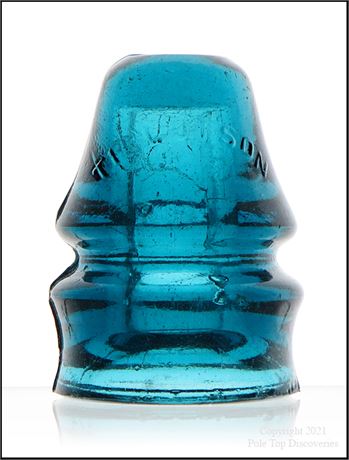 Various blue hues are known in the 731 Tillotson.  This one generally fits into the "sapphire" blue family, a little darker than some examples.

Produced circa middle 1860's to early 1870's for Tillotson, who was operating as "L.G. Tillotson & Company" at the time these "compromise" style threadless insulators were manufactured.  The concave skirt design was developed in the middle 1860's, and was produced in numerous mold variants ranging from the 729 through 732.4 series.

The 731 Tillotson was manufactured in a wide variety of colors, making them quite popular with collectors, several of whom are building attractive "color runs."  Pole Top Discoveries has been fortunate during the past two or three years to have received consignments from the two largest holdings of these colorful beauties.  The majority of exotic colors have been offered through our recent auctions.  Anyone who desires to add some colorful examples to their collections should act now, as the two examples in this event are the last remaining examples that have been consigned.

Very near mint, with only a touch of flaking at the base edge, and some pinhead and match head surface blemishes.  A beauty!

Exposure of the second photo is a bit dark, included to show the consistently strong embossing throughout.