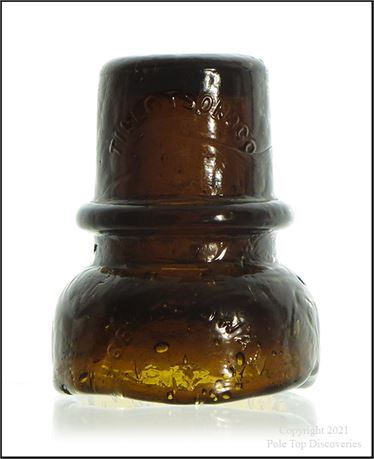 Produced for Tillotson & Company, a railway and telegraph supply house operating under this name during the 1860’s.

Shipments of insulators and other telegraph supplies were shipped from New York City in late 1864, traversed all the way down to Cape Horn and back up the western coast of South America and North America to British Columbia, a distance of nearly 16,000 miles! They arrived at New Westminster, British Columbia in June, 1865, and were immediately transported to the Fraser River, and destinations further north on the historic Cariboo Wagon Road, to be installed on the 1865 segment of the Collins Overland Telegraph Company line.

Amber examples have only been found in two or three locations on the route of the line. Of the various colors known in 735 Tillotsons, the amber is considered most desirable to the majority of collectors. They remain quite rare.

The base has an attractive, rounded under-pour, all the way around the insulator.

Shallow base flake is a little larger than a wooden match head.  Pinkie nail, open bubble on the reverse wire ridge  Any irregularities seen on the surface are small seed bubbles that popped during manufacture.  Third image shows additional attractive crudeness, and a rounded open bubble on the base.

Nice embossing can be seen on both the dome and skirt in the first photo, and again at left in second photo.

One of the best examples in existence!