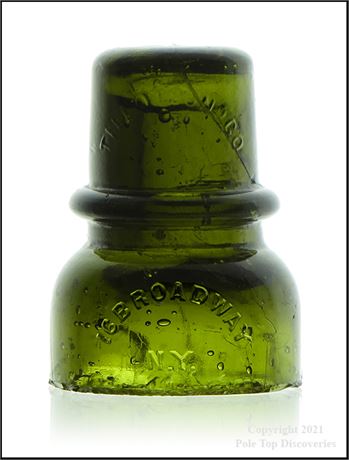 Rich, bright color! Only a handful of 735 Tillotsons are known in this attractive coloration. They were found decades ago along the old Cariboo Wagon Road to the north of Clinton, British Columbia.

The Collins Overland Telegraph Company constructed a single wire telegraph line in 1865 along the newly built wagon road in that area. Several different colors of Tillotson threadless have been found along the route, this being among the rarest and most desirable.

First and fourth photos show the strong embossing on both dome and skirt.

Third photo shows a flat base chip and internal, 1" skirt fracture above.  Another vertical fracture can be seen at center, starting at the base and traversing into the dome  A faint diagonal line can be seen from the upper right dome corner to the lower left dome, where a section of the dome was frost popped and expertly glued back in place.

There is some damage, but the dome repair shows very little and overall the insulator displays quite well.  The opening bid amount is set at approximately 7% of what you might expect to pay for a very near mint example, so give this one some serious consideration!