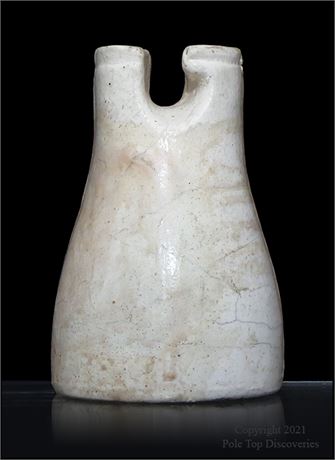 The first U-989 examples known in the insulator hobby were found in 1959 by Dr. Sid Phillips in the Mobile Bay, Alabama area. Dr. Phillips found this type insulator, along with various other types of threadless including porcelain tea pots, glass blocks, glass tea pots, glass slash-tops, 701, 701.5 and 701.6 eggs, and 737 pilgrim hats. Apparently the Confederates gathered insulators from various locations and used them on lines in the Mobile Bay area. After the Civil War ended, U.S. Military Telegraph crews dismantled those lines.

Charles LeBaron, a Mobile merchant, later patented this design in 1874.   His patent specifications included the "locking groove" feature within the interior pinhole and the offset saddle groove at the exterior top  (see second image).

More recently, some examples have been excavated at the site of the Southern Porcelain Company in Kaolin, S.C.  Southern Porcelain produced this design and the porcelain tea pots for a portion of the Civil War period.   Most examples found at the factory dumpsite had damage, and have been repaired.

About half the base and a portion of the body has repair.  This has been blended in quite well, so it is difficult to determine where the repair ends.  Judging from the weight, it would seem a sizable amount of the insulator is original.