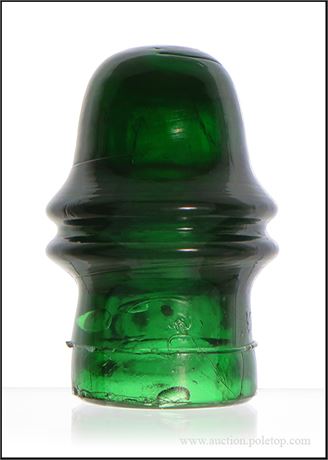 A super rare mold variant, and an incredible color!  In a north window, this amazing gem passes light through a vast majority of the insulator, freely exhibiting the incredible color.  Appears totally transparent with back lighting, yet has attractively streaked, jade-like impurities which glow when subjected to direct sunlight.

We only know of two whole examples. This example is quite a lot taller than the other, having an extended skirt.

The only place their usage has been documented is on the route of a telegraph line which traversed Mt. Washington in New Hampshire during the 1860's.  It’s amazing that any glass article could survive the harsh weather conditions on the mountain, where wind speeds have been recorded as high as 231 miles per hour, and winters are brutal!

The second image, circa 1869, depicts a short telegraph pole at the barren top of Mt Washington.

Incredible, sparkling condition!  Has an unused appearance.... very near mint+.

This one ranks way up there among the MOST desirable threadless!