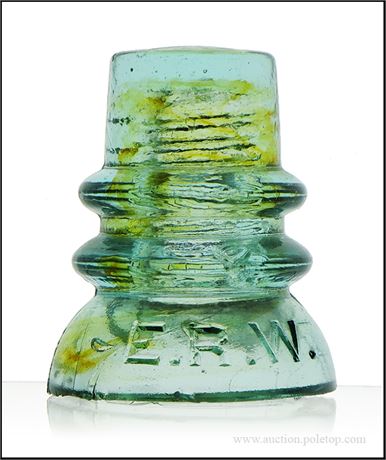 Highly unusual and very attractive coloration!  The yellow amber impurities spiral around the dome, through the wire groove and into the skirt, contrasting well with the very light aqua glass.

The Erie Railway used these “pilgrim hat” insulators on their “main line” through New York State and a portion of Pennsylvania, as well as several of their branch lines. The pilgrim hat style is typically recognized as an early, threadless form of insulator, making these threaded units quite unique.

Several aqua examples were found many years ago, still adorning poles, on the early “Buffalo Branch of the Erie Railway,” north-west of Hornellsville (now Hornell), which is depicted in the print shown in the second image. They are among some of the oldest threaded insulators made in America, dating circa 1868-1873.

The only example known in this color!  This gem was offered in Pole Top Discoveries' Catalogue Sale #25 in March, 1998.  Since being sold 23 years ago, it has resided in one collection.  A classic example of how important it is to purchase these unique items when the opportunity presents itself.  Otherwise, it might be a long time before they become available again!