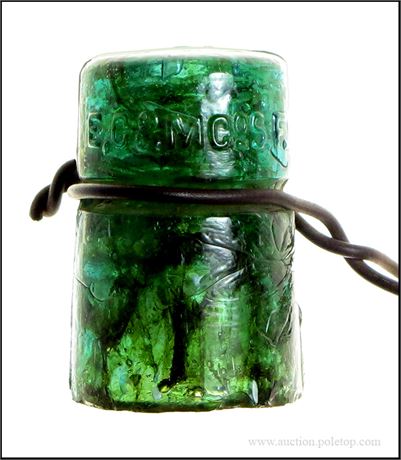 An abundance of heavy olive amber impurities streak throughout the glass, creating wonderful character.  One of the finest swirled examples known!  Additionally, the original 16 inch "swing wire" is still attached.

The route of California’s Ridge Telephone line, constructed in 1878, has been the source of many of the olive amber “swirled” examples in the hobby. The majority of those now in the possession of collectors probably came from that line. However, some were also found on the route of the Nevada & California Telegraph Company line between Austin and Battle Mountain, Nevada.

The Electrical Construction & Maintenance Company of San Francisco was organized in December, 1870. It served as a supply house for telegraph and electrical apparatus and materials. Glass insulators were produced bearing the E.C.&M. initials in the CD 123 style. As many as four molds were used over the years. Mold modifications were made over time, which resulted in eight classified mold variants.

A wide variety of colorful examples were produced, circa 1873-1880. The company was reorganized in 1877 and the California Electrical Works was formed. After C.E.W. succeeded E.C.&M., they started producing other styles of insulators with the “Cal. Elec. Works” and “C.E.W.” markings. Apparently C.E.W. continued to offer the E.C.&M. marked insulators for three or more years after they took over E.C&M. in 1877, as the CD 123 design was still illustrated in the 1880 C.E.W. catalogue.

Be sure to view all the various images to better grasp the extensive swirling in this gem.