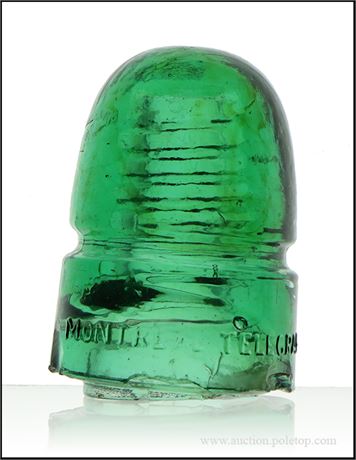 An interesting glass fin protrudes from the base, resulting in a lean to the right.  Adding further in the character department, fine olive amber wisps are present in the green glass.

Green examples of this embossed beehive style insulator are quite scarce and desirable. Contrasts well with the darker emerald examples, and likely as rare, or more rare than that colour. A “must have” item for anyone attempting to assemble an attractive colour run of Montreal Telegraph beehives.

The Montreal Telegraph Company was one of Canada’s earliest communication companies, having been formed in 1847.  These jewels date from the later portion of M.T. Co. existence, likely from the middle 1870's to perhaps the early 1880's.

Pinkie nail flake to the left of the "M" and another below the "GR."  Bruise from the inside edge of the base traverses about 45% of the distance around (see second photo).

Update 8:05 P.M. Saturday, March 27:  Third photo added showing the grooved base.  Note the interesting thin "fin" which protrudes out of the base area, causing the insulator to lean.  We also wish to point out the initial condition report focussed on the exterior portion and the base bruise.  We failed to mention some shallow base flakes, which can be seen in the additional photo.