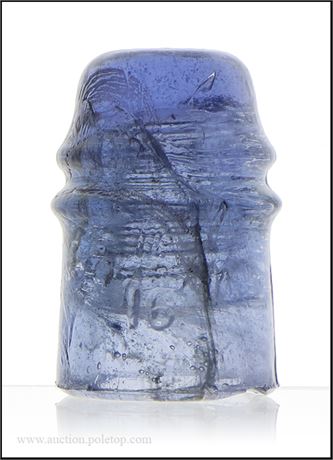 Attractive character in this "Denver toll."  Well pronounced foamy impurities are positioned throughout much of the rear skirt.  An abundance of light gray foam arcs trough the skirt and dome, with traces of darker carbon scattered about.  In areas where this impurity remains on the surface, a thin layer of brick orange residue is present. This impurity caused an attractive ripple effect on the glass surface, as seen to the left dome area in the first photo.

Insulators were produced in the Denver, Colorado area for a number of years spanning from the 1890’s to the 1900’s. Robert Good Jr. arrived in the Denver area in 1895. Shortly thereafter, an idle glass factory in Valverde, on the outskirts of Denver, was reopened. Mr. Good was general manager of glass production at the plant. Based on old documentation, bottles and jars were produced in large quantities at the factory in 1896 and 1897. In addition, a May, 1897 article in The Industrial Reporter states that a work force of twenty men and boys was producing glass, which included insulators.

A large fire destroyed one of the main buildings operated by the company in June, 1899, with loss reaching into the thousands of dollars. The furnace was rebuilt shortly thereafter, and the plant reopened in October, 1899, with new owners, operating under the name Western Flint Glass Company. Robert Good Jr. remained in the area during the fall of that year, reportedly to help with getting the factory operational again. The plant operated under the W.F.G Co. name for a short period of time, and then became known as the Western Glass Manufacturing Company, which existed until approximately 1909.

Above information obtained from a chapter written by Don Reinke in John & Carol McDougald’s book A History and Guide to North American Glass Pintype Insulators.

Flat base chip (see first photo, to right of center) traverses about 20% of the base.  Remainder of insulator is very near mint+.