We THANK everyone for your interest in Sale #2104.

Invoices are viewable by using the "My Account" tab. 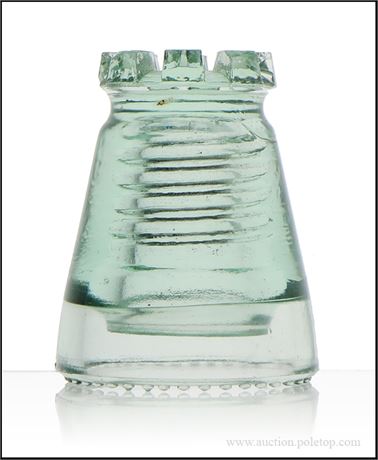 The elusive green colored “Castle.”   First found in the Taft, California area, and later a few were reported to have been recovered in Hawaii.  By far the most difficult color to acquire, with few examples known to exist!

This particular jewel is confirmed to be part of the small number found in the Taft, California area.

Although not embossed with a manufacturer's name, these seldom encountered jewels are believed to have been produced by the McLaughlin Glass Company in Vernon, California.

The outermost surface of one turret is flaked.  Match head flake on one turret, and another has a minimal, very narrow slice on the very edge.  Small base chip (see second photo) removes only one drip point and partially flakes two others.

Not perfect, but nicer condition than many castles!