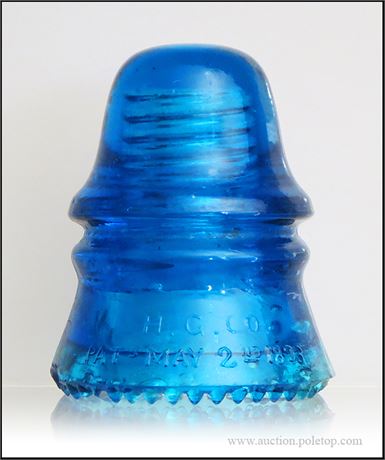 This particular example has coloration that falls between peacock blue and electric blue.  The late Bill Reed had a similar colored CD 162 HG Co. signal that he called "electricock blue," so we have borrowed his terminology in describing this CD 151.  This CD 151 even has a small amount of the "primer red" streaking (see second photo) also present in the glass of Bill's signal... indicating it was perhaps produced from the same glass batch.

This is a rarely encountered color, and certainly one that Hemingray or CD 151 specialists would find of special interest.

Despite the two base areas described above (positioned at the left and right sides), the insulator displays quite well from the front or reverse.

Please note:  this color, as well as any blue examples in the peacock and electric blue family are difficult to reproduce with digital photography.  This particular example is similar to both electric and peacock blue, with greater tendencies toward a darker shade of electric blue.