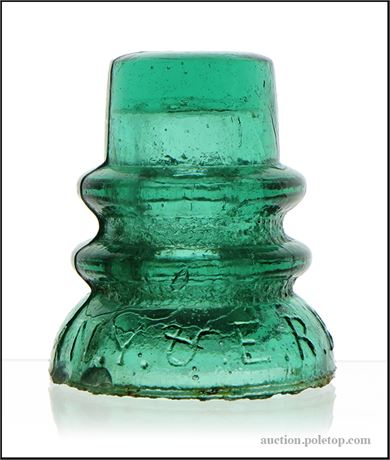 Rare in aquamarine and perhaps unique in this attractive green coloration.

This jewel was discovered by the wife of an insulator collector during the mid-1970's at a flea market located between Corning, N.Y. and Binghamton, N.Y.  The vendor at the market had a large piece of tape on the insulator marked "$5 Firm."  There was no negotiating, so the purchaser had to fork out the full $5 to make the deal!

Although the insulator could have "travelled" to the flea market from any location, it's reasonable to believe it was likely found locally, the old NY&ERR route less than a mile from the market location.

Some embossed NY&ERR hats were also placed in service along branch lines during that time period including those to Rochester and Buffalo, and later the Atlantic & Great Western Railway from Salamanca, New York, through northwestern Pennsylvania and then diagonally to Dayton, Ohio.  The Erie is known for its prolific use of large “hat” style threadless.

Shallow flake at lower left skirt is only 1/3 the size of a pinkie nail  Shallow, 1" flake-type, base chip.  Great condition for this damage prone style!