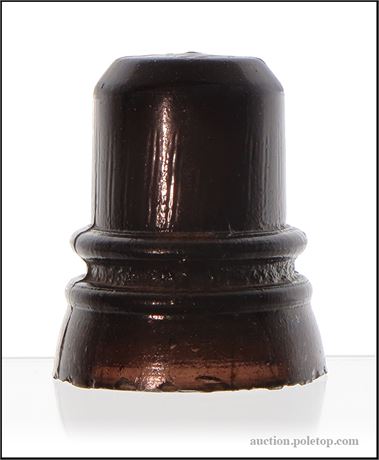 Known as the "Washboard," some examples of this "hat" style threadless insulator are known with a smooth dome, while other examples have varying degrees of a washboard appearance on the outer surface.  This jewel has some washboard pattern all the way around the upper potion of the insulator.

Typically found in aquamarine colored glass, puce examples are quite rare, with only two examples known to us.  Although both are puce, there is some difference in the color toning of these two examples.  This one has a burgundy tone to the unusual, flesh-gasoline toned glass.

739.5 insulators have been discovered at various locations along the route of the New York Central Railroad between Albany and Buffalo.  The New York Central was formed in 1853, the consolidation of 10 small railroads that crossed the upper portion of New York State.

The illustration shown in the third photo depicts a train on the New York Central in 1884.

Fabulous overall condition!  No actual damage from use!  Has only some shallow flakes along the base mold line where excess glass (which squeezed between the mold pieces during manufacture) was removed.

Consider this jewel has been in one collection for over 40 years, and the other puce example likely isn't going anywhere for decades. Perhaps a once-in-a-lifetime opportunity to purchase one of these strangely colored rarities?