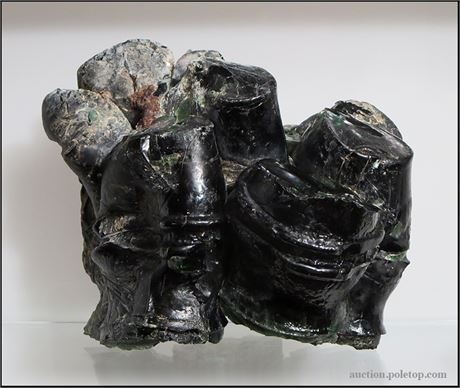 An amazing mass of eight "Confederate eggs" fused together.  Found at a construction site near the Mayo Bridge in 1990, just to the south of the Capital District in Richmond, Virginia,  This amazing, historical relic weighs 14-1/2 pounds!

A quantity of 701.6 eggs were found by Civil War relic collectors at a construction site near the James River.  Most were singular examples, with only a small number of fused groups such as this.

The insulators were found in a large area of brick and rubble, the remains of a large fire which occurred as Union forces entered Richmond on April 3, 1865.  Confederate troops and civilians fled the capital city, part of which was engulfed in flames.  Large masses of people escaped across the Mayo bridge, only a stones throw away from where the insulators were discovered.  With the fall of the Confederate capital, the Civil War ended shortly thereafter.

The 701.6 eggs are among the most highly appealing insulators to collectors, owing to their exceptional historical significance.  This fused grouping tells the story of the fire in a profound way.  Looking at this historical relic, one can sense the panic of the individuals fleeing the city as Union forces drew near.  Meanwhile flames, smoke and ash filled the air as buildings burned and munitions at the arsenal exploded.

Red coloration on one side from brick residue adds special character, and further tells the story of the fateful day over 150 years ago.

Condition... what can we say... the insulators are attractively deformed from intense heat created by the historical fire over a century and a half ago.  One insulator is missing the top and another has a little recent chipping on an edge, otherwise nearly the same appearance as its had since April 3, 1865.

Will be carefully, well packaged for shipping, or delivery is available to the Springfield show In November or other destinations in our future travels.