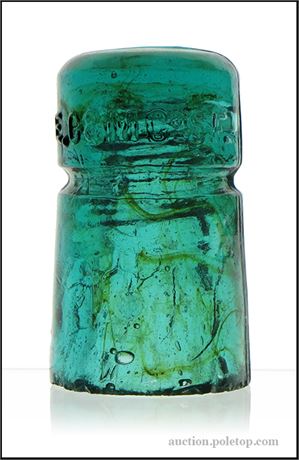 "D" mold with 4-1/8" height.  The "D" mold is known as the "Tin Mold" or "Sheetmetal Mold" due to a raised band formed at the juncture of the two mold halves which traverse from the base, up the sides and over the dome.

Produced in the 1870's for the Electrical Construction & Maintenance Company of San Francisco, California.

The attractive olive-amber impurities streak and swirl throughout the insulator.

The Ridge Telephone line, constructed in the 1870's from French Corral, California to water reservoirs high in the mountains to the East, used EC&M's in the early stages of construction.  Many of the olive-amber swirled EC&M's now in collections were recovered on the route of that line, which was used to control water in the operation of hydraulic mining.  A few were also recovered on the route of a communication line between Austin and Battle Mountain.

A little, light flaking on the outer base edge.  Two, side-by side, pencil eraser diameter base flakes.  Remainder of base is spectacular!  Much, much nicer condition than the majority of EC&M's!