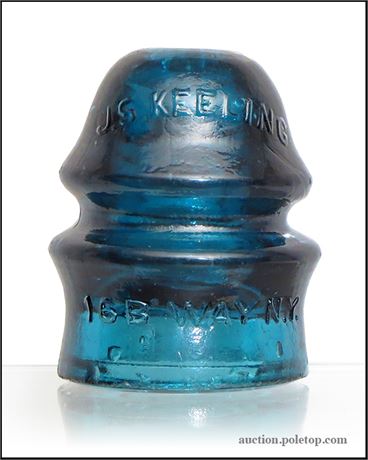 An amazing item with fabulous color and bold embossing!

To date, we've only encountered one other similar example, a damaged unit that surfaced on Ebay, three or four years ago, by a seller in New England.  It may have been a somewhat different color tone?

This exotic jewel reportedly was found decades ago by someone in northeastern Florida.  The late Jim Meyer once stated that it was found in someone's yard by the property owner.  Apparently the landowner was doing some digging, and the insulator surfaced!

Keeling offered various types of insulators, as seen on a page from an 1860's catalogue (fourth image).  The ad stated "Telegraph Insulators of All Patterns."  The advertisement further included "from my own moulds.  A large stock always on hand."

Embossed "Keeling" insulators are rarely found in any color, this by far being the most exotic and desirable.  Perhaps a once in a lifetime opportunity to acquire a super desirable item!

Spectacular, very near mint condition.  As bright and shiny as the day it was made!