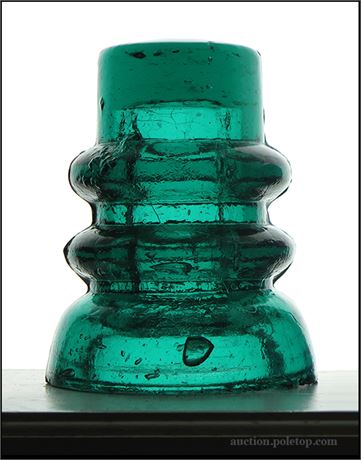 These unmarked, large "pilgrim hat" style insulators have been found almost exclusively on the route of the NY&ERR.

Measuring an impressive 4-1/2" height, this gem has extra thick glass, making it quite heavy.

A fabulous example that remains in sparkling, wonderful condition!  Has only a couple very minor surface flakes, as seen in the second photo.  Finding examples of this insulator is quite difficult, especially in this marvelous condition!

Great depth of color in this beauty too!  Love that crude, pebbly surface on the upper wire ridge!

Plunkett Family Collection.  Purchased by the Plunketts from Graham Barnes decades ago.