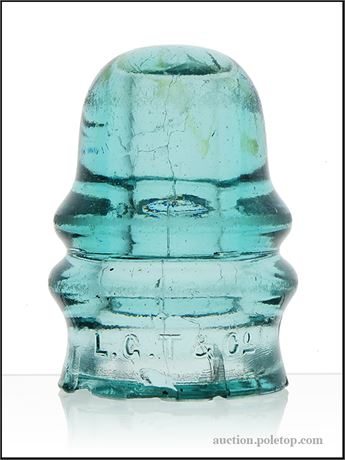 The glass has extra nice clarity and richness.

A very rare threadless insulator!  To date we've only confirmed three to exist, but certainly there must be another one or two in collections.  One recently surfaced in New England.  Otherwise, we've not seen one for sale in decades!

Produced for L.G. Tillotson & Company, a telegraph and railway supply house which existed in NewYork City.  Tillotson was superintendent of telegraph for the New York & Erie Railroad and later started the supply house in the early 1860's, which he was involved until his death in the mid 1880's.

Short internal fracture can be seen from base to the "C."  Flat base chip below the "L."  Flat skirt chip below "T" and another on reverse skirt.  A little "high point wear" on the extreme edge of the wire ridges.  All damage is shown in the two photos, and the actual appearance of the insulator is better than perhaps the description sounds.

A rare type that typically only surfaces for sale once every 15 to 20 years.

Plunkett Family Collection.   This LGT &Co insulator was purchased by the Plunketts from Kerry Lavendoski.  Kerry had located two examples in the 1970's, so was willing to part with this one.  It was originally sold by the proprietor of an antique shop in Moira, N.Y. to someone.  Upon learning of the sale, Kerry tracked down the new purchaser, and was able to buy it, later selling it to Paul Plunkett.