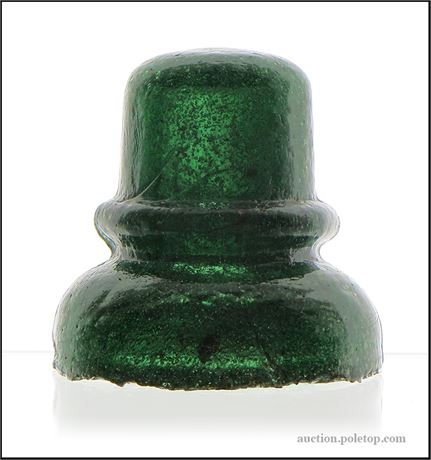 An exceptional beauty!  In over 50 years of collecting, this is the only encountered example of a "see through green," super bubbly 740.  WOW!

Literally thousands upon thousands of small bubbles fill the glass!  And, making it even more special, the green glass is a density that allows plenty of light to freely pass through the entire insulator.  The photos show the insulator as it appears in a normal backlighted cabinet or north window.  In fact, the insulator might even pass more light than the first photo depicts.

The base view shows the extra raised ring at center of base and another raised ring between the base and pinhole.  Apparently, an early attempt of removing condensation, long before the invention of drip points.

Super crude surface with heavy folds and creases on the glass surface.  Amazing character both inside and out!

Overall, consider it very near mint... with just a little, minor flaking up from the base.

There should be an abundance of interest in this spectacular gem!

Plunkett Family Collection.  Although not entirely certain, Skip Plunkett believes this one might possibly have surfaced in the St. Louis area.